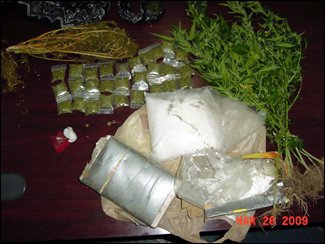 Three search warrants were executed on premises and over twenty persons were stopped searched in Nevis on March 28th 2009, when a joint task force comprising of officers from several stations and departments in Nevis conducted an exercise.

The exercise resulted in the seizure of a large quantity on cocaine from an abandoned house at Happy Hill, the uprooting of twenty marijuana plants ranging in height from 2 to 3 feet, from an empty lot at Pond Hill, twenty-eight transparent plastic bags containing marijuana from an unoccupied plot of land at Browne Pasture, and the arrest of four persons for possession of marijuana.