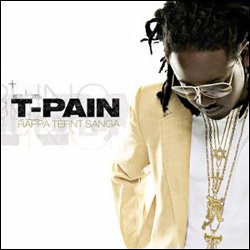 Well known singer-songwriter, rapper and producer T-Pain will be among the premier acts at the 13th Annual St. Kitts Music Festival, which will take place on the island from June 25-27, 2009.

Recognized for his masterful use of autotone, T-Pain began his musical career in the group Nappy Headz as a rapper.  He released his debut album, Rappa Ternt Sanga, in 2005 after being signed to Konvikt Music, which produced the hit songs “I’m N Luv (Wit a Stripper)” and “I’m Sprung.”  In 2007, T-Pain’s second album, Epiphany, was released, debuting at #1 on the US Billboard 200 chart and going on to become his first number-one album.  Since then, he has produced many hits of his own as well as for many other rap, hip-hop and R&B singers, often appearing on their singles.

In 2008, he won a Grammy for Best Rap Song and the BET Award for Best Collaboration, both with Kanye West for the single, “Good Life.”  He also appeared on numerous charting singles, including “Go Girl” by Ciara, “One More Drink” by Ludacris, “Shawty Get Loose” by Lil Mama, “She Got It” by 2 Pistols and “Go Hard” by DJ Khaled with Kanye West.  T-Pain’s third album, Thr33 Ringz, was just released on November 11, 2008.

“I’m excited to be a part of this year’s St. Kitts Music Festival,” said T-Pain. “It’s an amazing event and I hear the energy from the fans is even more amazing.”

“I’m certain that T-Pain will be a big draw for this year’s St. Kitts Music Festival, attracting both local and international music-lovers to the island,” said Senator Ricky Skerritt, Minister responsible for Tourism, Sports & Culture.  “His numerous hit songs and popularity that spans multiple generational groups make him the perfect complement to other artists that have been signed for this year, adding to the mix of musical styles that will be represented at this block-party style, world class event.”

Music lovers from the US and Canada who are looking for a great vacation can get to St. Kitts via non-stop service on American Airlines from New York (JFK) or Miami, on Delta Air Lines from Atlanta, and on US Airways from Charlotte as well as via connecting service through San Juan on American Eagle or via flights on regional carrier Liat from Antigua.