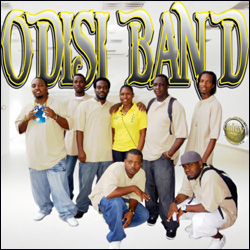 Attorney General and Minister of Justice and Legal Affairs in the federal parliament the Honourable Patrice Nisbett and Minister of Agriculture, Housing, Lands, Cooperatives and Fisheries in the Nevis Island Administration the Honourable E. Robelto Hector, were listed as sponsors of the Odisi Band’s first video shoot.

In a recent interview with the Department of Information, band members Mr. Kenny Warner alias “Eazi” and Mr. Thyron Jeffers alias “Speedy” recorded their appreciation to the sponsors and fans for their continued support.

The three-part video shoot will feature the hit song “Whining Time” from the Odisi Band’s most recent album: “Odisi 2 di World” and is expected to improve the band’s regional and international fan base.

“The song has been making some waves regionally as well as internationally, so we just decided that we’ll do some more promotion in terms of a video and get the music out there so other people could see as well as hear the band so they could get acquainted with the band itself and the members,” Mr. Warner explained.

The first third of the shoot commenced last Saturday [February 12] at the Brickiln Hard Court and featured the Small Axe Band from neighbouring island St. Kitts.

“The first shoot, last Friday, came off very decent at the end. First, the ladies were a bit shy but after the sweet sounds of the Odisi hit them, whining started,” Mr. Jeffers said.

The second and final thirds are scheduled for February 19 and March 4 at the St. James Raceway and the Pinney’s Beach Hotel respectively with Judgement Sounds and the 2010 King of the Jungle Sound Clash champions Out Ã¢â‚¬Ëœn Bad Sounds also being featured at the March 4 segment of the video shoot.

“It will be a free dance so if anybody wants to come out, show their faces and enjoy themselves, just come out,” Mr. Warner said of the final third of the shoot.

“The world will see you,” he added, as he spoke of the band’s plans to have the music video featured on the Caribbean television station: Tempo and the internet video uploading site: Youtube.

The Odisi Band, since 2003, has contributed to the island’s annual summer festival, Culturama, and captured the road march title in 2006 with the hit song “Do it like we” and in 2009 with “See di sweetness dey.”

“We are also planning on doing a video for that as well. Generally, we are working on the album for 2011 which is highly anticipated.

“Also, we’re having a dance this Sunday [February 20] at Sand Crab Hole. That’s at Newcastle on the eastern side of the airport. Generally, we always get a good turnout at that dance because it’s a free dance as well. We’ll have Judgement Sounds, Braveheart Sounds: the young guys out of Cotton Ground as well so you could just come out and enjoy yourselves,” Mr. Warner said just moments before recording his appreciation to “all Odisi supporters.”

The Odisi band comprises of seven young men: six of whom are residents of the St. James Parish.

In addition to winning the Culturama road march champion title, the Odisi Band has captured the King of the Jungle Band Clash champion title for the past two years.