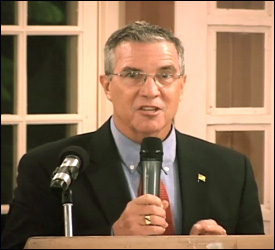 General Manager of the Nisbet Plantation Beach Club on Nevis Mr. Jamie Holmes, called attention to the importance of guest satisfaction and loyalty to the Tourism Industry on Nevis. He was at the time delivering the keynote address at the Ministry of Tourism’s Awards Dinner and Dance on February 12, 2011.

The event which honoured a number of deserving persons for their contribution to the industry on Nevis was held at the Old Manor Hotel in Gingerland. The ceremony marked the end of Tourism Week 2011, an occasion intended to sensitise the public of the importance of tourism to Nevis. The theme was “Tourism Our Treasure”

Mr. Holmes, whose establishment received the award for Corporate Business of the Year, had in recent times also attracted regional and international recognition in the area of tourism.

“In return when the airlines stopped flying they still came. The loyal guests still came. The satisfied ones said we really like Nevis but we are going to go where the plane goes and they even returned when the taxis went up. They also forgave our mistakes, they advocated for us by selling our resort and our island to their friends and family and they even defended us when they heard someone putting us down,” he said.

Mr. Holmes said the island of Nevis was a treasure in the hands of all but it was up to every individual to embrace it. He said it was important to remember that tourism was one of the greatest export products in the Caribbean in particular Nevis and St. Kitts. He described it as a “clean” business which saw tourist bring their money but left with a memory, some souvenirs and receipts for the bills from the hotels

“Now that’s about as clean an export business you are going to get so remember that every time we embrace a tourist they are helping us with our balance of trade because they are bringing that in and bringing their memories home,” he said.

The Hotel Manager also had some advice for his colleagues and pointed to a tested experience he explained held true for his establishment.

Tourists, he noted, were attracted to highly spirited people but too often they encountered employees who offered indifferent, maybe even robotic or in some cases rude service. They routinely saw service employees sleep walking through their job and those negative practices should not be allowed.

“You have all seen it. You are also people who consume, you know that [and] we cannot allow that. I can tell you that maybe some of the workers are even better intended but they are hamstrung by the business that they are in and all the rules are made so that they can follow their internal protocol instead of embracing what the tourist is looking for and showing them that highly spirited person.

“We as leaders must recognise we are running the business for the benefit of the guest not for the pleasure of the accounting department. Tourist are longing to interact with you and relate to employees who plays like there is a light on inside so they can feel that spirit, they can feel that emotion and they can feel that from each and every one of you,” he said.

Mr. Holmes pointed to Nisbet Plantation’s introduction of a spirited motivated employee for the benefit of its customers referred to as “Engaged”. He said the results had convincingly demonstrated that the correlation between employee engagement with their guests and guest loyalty, as well as the important tie between customer loyalty and profitable growth for the business.

“We [Nisbet Plantation Beach Club] love our loyal guest and they become loyal guest because we engage them at a higher level than any of our competition.

“So remember, engage your guests, embrace your guests, listen to your guests and most of all enjoy them and they will repay us all by becoming returning guests and raving fans for the island of Nevis. Remember tourism is our treasure,” he said.