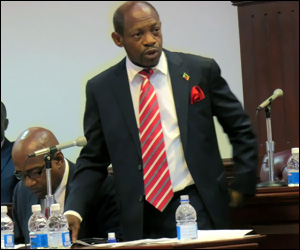 An emergency meeting of the St. Kitts and Nevis National Assembly to give Federal approval for the Nevis Island Administration (NIA) to borrow EC$1 million from the St. Kitts-Nevis-Anguilla National Bank was short-lived after the Premier of Nevis, the Hon. Vance Amory informed the Prime Minister the Rt. Hon. Dr. Denzil L. Douglas in a private meeting before the assembly convened that the money will now come from other sources.

In a statement in the lawmaking body, Prime Minister Douglas, in his capacity as Minister of Finance, withdrew the resolution.

Dr. Douglas told lawmakers and the Nation that the Nevis Island Administration of Premier Amory had requested the St. Kitts- Nevis- Anguilla National Bank to extend the existing overdraft facility, which currently stands at EC$64.3 million by an additional EC$1 million.

“The Bank however requires collateral to cover the additional debt. We have therefore come to the National Assembly seeking approval so that the Federal Government can provide the necessary guarantee for the borrowing of $1,000,000.00 by the NIA, as indicated in the Resolution which will be withdrawn.”

Dr. Douglas said that The Finance Administration Act 2007 provides for the control and management of public funds, the authorizing of expenditure, the raising of money by Government and the control of the public debt and giving of guarantees.

“The Act is a modern piece of legislation which provides in a comprehensive manner the legal basis that is necessary for operating in a modern, global, information age where accountability and transparency are two of the cornerstones of good financial management,” said the Prime Minister.

He pointed out that Part VIII of the Act provides for Public Debt and Guarantees.

“In section 48 it states that “Money shall not be raised on the credit of the Government except under the authority of an Act of Parliament or of a Resolution of the National Assembly.”

“The subsequent sections outline how short term borrowing, long term borrowing and guarantees should be dealt with.  Section 55 which deals with Restriction on Guarantees states “A guarantee of a financial liability shall not be given by the Government unless it is (a) given in accordance with the provisions of an Act authorizing the guarantee; or (b) authorized by resolution of the National Assembly.”