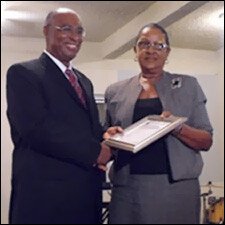 An official ceremony will be taking place, as Cicely Grell Hull and Dora Stevens will witness the Nevis Netball complex renamed in their honour on Saturday, October 14th, 2009 at 4pm.

The naming ceremony will commemorate the civic achievements of Mrs. Grell Hull and Mrs. Stevens, by recognizing their sterling contributions to Nevis society.

Premier of Nevis, the Hon. Joseph Parry and his Nevis Reformation Party- led Cabinet approved the renaming of the Netball complex earlier this year and the decision was formally brought to the public on September 16th 2009 on National Heroes Day.

The event was held at the Occasions Centre at Pinney’s Road, where eight persons who contributed to the development of Nevis received public recognition.

In tribute to the selfless contributions of several noteworthy sons and daughters of the soil, the Ministry of Community Development in the Nevis Island Administration has decided that a number of important landmarks would be renamed in their honour.