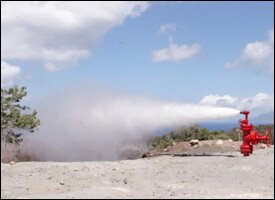 The company responsible for the development of geothermal power on Nevis stated categorically, that operations on the island had not been linked to any seismic activity and none should be expected as in the recent experiences in Germany and Switzerland.

In a press release dated October 13, 2009 from West Indies Power’s (WIP) Media Manager Mrs. Lali Diaz-McDonald, the company contended that there were incorrect comparisons made between the geothermal development on Nevis and elsewhere in the USA and Europe.

“Recently there has been incorrect comparing of the reservoir system existing on Nevis and being developed by West Indies Power and the hot dry rock or Enhanced Geothermal System (EGS) geothermal projects in California, Germany and in Base, Switzerland which were suspected of causing seismic events.

“These are two different types of geothermal reservoir systems that are developed in totally different ways and respond to development differently,” Mrs. Lali Diaz-McDonald said.

The Media Manager further explained in the release that during an EGS operation, attempts are made to create an artificial geothermal reservoir and solid rock would be fractured to create paths which would allow the geothermal solution to flow.

“The procedure to create these fractures is done by pumping pressurised water into the hot dry rocks that cause the rocks to shatter. This procedure has the possibility of releasing large amounts of energy that could cause earthquakes. There is currently no large scale commercial production from any EGS operation.

“The geothermal reservoir systems that West Indies Power is developing in Nevis and other parts of the Caribbean are naturally occurring hydrothermal systems. There are currently over 10,000MW’s of commercial geothermal production from this type of geothermal reservoirs in 24 countries,” Mrs. Diaz-McDonald explained.

She said in the hydrothermal reservoir systems all the fractures within the rocks had occurred naturally and no artificial fractures were required. Therefore there was no release of energy to cause earthquakes as was likely to occur in the EGS project.

The WIP release further stated that continuous geothermal production from naturally occurring hydrothermal systems was nothing new and had been in operation since 1902.

Mrs. Diaz-McDonald also stated that the entities which monitored seismic activity in Nevis and the rest of the Caribbean had shown no seismic event with an epicentre between St. Kitts and Nevis and dismissed claims that seismic activity in the area had been linked to the geothermal programme which commenced on Nevis in January 2008.

“These monitors detect the size and location of seismic events in the Caribbean on a daily basis. There has been no reported seismic event with an epicentre between St. Kitts and Nevis,” the press release said.