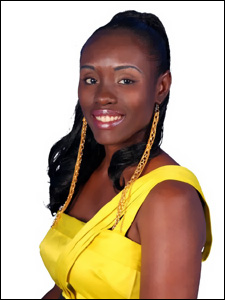 On August 22nd 1991, the clouds cleared and as the sun arose to declare the creation of Ronice Nerida Kedran Williams, the first born of Mr. Rolston and Janice Williams. The eldest of three children, Ronice was taught the importance of discipline, honesty, maturity and a need for education in the Williams’ household. Being the only daughter, Ronice developed a momentous bond with her mother that has grown over the years into a significant relationship that has spawned Ronice into a young lady of confidence, self-respect and poise.

Having resided at Potworks Settlement, Nevis, Ronice’s early childhood education began at the New Castle Pre-school. She was then placed at the former “Combermere Primary School” where, upon graduation, she was awarded best Language Arts & Mathematics student. She successfully completed high school at the Gingerland Secondary School, the place where she took a keen interest in foreign languages and business subjects. Armed with a yearning to continue her academic and personal development, Ronice enrolled at the Nevis Sixth Form College where she pursued and successfully attained passes in Business subjects.

Currently, Ronice is employed by the Nevis Island Administration as an Assistant Executive Officer in the Ministry of Trade and Industry.  Ronice sees the future as a mechanism for continuous growth and development. This is why she has been accepted to begin studies at the University of the West Indies’ Open Campus for the 2012-2013 academic year.  It was Dr. Martin Luther King who said “Intelligence plus character”¦ is the goal of true educcation!” Ronice personally holds this motto as a meaningful pathway for her everyday life. She is prepared to embrace new challenges while working diligently towards attaining her Bachelor’s Degree in Business Management.

Ronice is quite an active individual who has participated in the Nevis Drama Youth Group which ignited her passion in drama and dance. Now a member of the Nevis Tourism Youth Council, Ronice has further expanded her public interests as a radio personality, lending her voice to radio programmes and company advertisements.