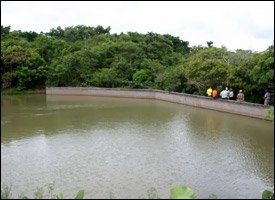 A visit with Agriculture Officials on Nevis Friday from Taiwan Ambassador to St. Kitts and Nevis His Excellency R.C. Wu, came on the heels of an announcement by Premier of Nevis Hon. Joseph Parry that the Taiwanese government had promised to assist the Nevis Island Administration (NIA) to develop the island’s basic agriculture infrastructure.

Mr. Wu told the Department of Information that he had come to explore the possibility of restoring the irrigation system, which would provide the farmers in the Cades Bay area with millions of gallons of unused water that had been stored in dams in the Spring Hill area for a number of years.

At the end of the visit he said all parties had forged a consensus that the irrigation system should be restored.

“When I see water idly here I feel that it is really a pity so with the joint effort of IICA, the Ministry of Agriculture and us [Taiwan] we are very happy to cooperate together.

“In the shortest time we are going to send a technician to survey how to restore the irrigation system. In the long run we also have to discuss with farmers how to raise their productivity because technology wise there is no problem, water wise there is no problem. The only problem is that farmers have to know what to grow, how to grow and when to grow,” he said.

Permanent Secretary in the Ministry of Agriculture Dr. Kelvin Daly was of the view that restoration of the water piping system would have a positive impact on the forward movement of agriculture on Nevis.

“It is unfortunate that we allowed over these years these dams to go to disrepair because the resource is tremendous. We have 7million gallons of water just sitting”.

“This is an area that is tremendously productive in the best of times and it can again get to the point where it was in high production, if the farmers were allowed to get this water that is stored here at Spring Hill. I think the impact will be noticeable,” he said.

Meantime, Inter American Institute Corporation on Agriculture Representative for St. Kitts and Nevis Mr. Augustine Merchant, a former Director of Agriculture on Nevis, explained that the dams were constructed under a project funded by the United States Agency for International Development (USAID) in the 80s.

He said in the 70s and 80s water was one of the limiting factors for agricultural production on Nevis. The island had been used to frequent water shortages even for domestic use and little importance was placed on the need for water for agriculture.

The NIA therefore felt that with the rainfall we were getting and the water as a result of the rainfall which went to waste could be captured and used for irrigation. So during the period of the 80s a project was written. This project was called Resource Management Project.

“As a result of that a number of dams were done in this area. This one which we are right by was enlarged and also the retaining wall was made from concrete and I think there were two other dams which were done,” he said.

Under the programme a bulldozer was purchased and the Department of Agriculture staff constructed other dams in the area and other parts of the island for irrigation purposes.

Mr. Merchant said over the years that followed, farmers were able to use water for up to seven months of the year and it had assisted them greatly to continue to have a decent livelihood.

“The water from the dams had a tremendous impact on the farming operations at Cades Bay. As a matter of fact that period coincided in the early 80s when the Four Seasons came on stream.

“As a result of that the Ministry was able to develop a programme whereby farmers were able to supply the hotel on a timely and regular basis with products and this would not have been possible without the assistance of those dams,” he said.