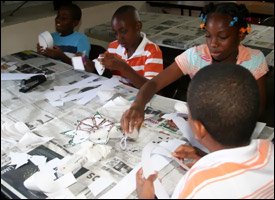 Tuesday 16 December 2008, saw the commencement of a three-day art and craft workshop for children aged eight to 10 years facilitated by the Nevis Public Library.

Librarian at the Nevis Public Library Mrs. Lornette Hanley spoke of the purpose of the workshop.

“The idea of the Christmas Craft Workshop is one, to occupy the children around this time, for just a few days and also for the children to learn some skills; how to be creative, make their own decorations,” Mrs. Hanley said.

In speaking about the decorations, she told of some of the inexpensive materials being used to make crafts.

“We’re using egg crates to do little bells; we’re using construction paper to do boots.  We also are using scraps of string so that we can hang stuff with.  We are using used old cardboards to make some trees and strip up bits of papers.  We are making angel,” she said.

According to Mrs. Hanley, a focus group of eight to 10 year olds was specifically chosen because of the nature of the crafts to be made.

“For the eight to 10, some of them might be able to use the scissors properly.  We would not have so much mess to begin with also, for some of the things we are doing like for instance angels they have to trace them and then they have to cut them out so we catered for the older set who can manage or handle some of the craft on their own as we supervise so that’s the main reason,” she said.

The three-day workshop would begin at 9:30 AM daily and runs until 12 noon.  On Thursday 18 December 2008 at 1 PM the students will display their creations in an exhibition and be treated to a party.