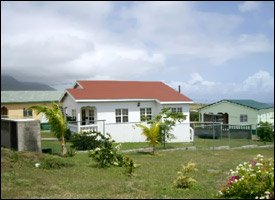 The economy in St. Kitts and Nevis continued on a path of positive economic growth and development in 2007 with construction leadimg the sectors.

Minister of Finance, Dr. the Hon. Timothy Harris in presenting his first Budget Address in the St. Kitts and Nevis National Assembly said that despite the many challenges the Federation faces, “we have remained committed to the creation of a well-diversified, service-oriented economy.”

Dr. Harris said that the foundation for this transformation was laid in the years prior to the closure of the sugar industry in 2005 as considerable investment was made in the Non-sugar Agriculture, Tourism, Information Technology and Financial Services Sectors.

“These sectors have since been clearly identified in our National Adaptation Strategy as the pillars on which this new economy will be built. Indeed this is credible evidence of the foresight of this Government in recognizing quite early that in light of continued trade liberalization and threats of global economic and financial turmoil our economy would have had to undergo significant change and become more competitive,” said the Minister of Finance.

Dr. Harris said the results are illustrated in the positive macro-economic position and improvement in the standard of living of the citizens of St. Kitts and Nevis.

He added that notwithstanding the negative impacts of exogenous factors such as rising oil prices and the threat of a slowing world economy, St. Kitts and Nevis has continued on a path of growth, recording an expansion rate in real GDP of 2.9% in 2007.

“This growth is attributed to increased activity in the Construction, Distributive Trade, Transportation and Communications, and Financial Services Sectors. This growth has been accompanied by significant social progress,” said the Minister of Finance, referring to the United Nations Human Development Report 2007/2008 which ranked St. Kitts and Nevis 54 out of 177 countries worldwide ahead of all Caribbean countries except Barbados and the Bahamas.

“Our performance in terms of the Human Development Index is indicative of our strong focus on human development and of the effectiveness of our programmes aimed at poverty reduction,” said Dr. Harris.

He said that the Construction sector has continued to be the leading sector in this economy accounting for 15.5 percent of Gross Domestic Product in 2007, an increase in activity of 4.4 percent when compared to 2006.

A significant proportion of this expansion was due to ongoing work on several large and medium scale projects such as Ocean’s Edge Resort, Sunrise Villas at Half Moon Bay and the Silver Jubilee Athletic Stadium.

The robust performance of this sector was not only as a result of large scale development, but extended to other areas in the sector.

He reported that home construction continues to make a vital contribution which can be linked to the overwhelming response of citizens to Government’s vision of wealth creation through land and home ownership.

He noted that the ECCB’s Commercial Banking Statistics Report reveals that loans and advances for construction activity increased by 38.8 percent to $427.9 million in 2007, of which financing for home construction and renovations accounted for 56.8 percent.

The Federal Minister of Finance said that continued expansion in the economy was accompanied by a moderate increase in inflation.

“The consumer price index on a period basis rose by 4.5 percent in 2007, a marked decline from 8.5 percent in the previous year. The increase in the consumer price index in 2007 can be attributed mainly to the increase in oil prices as indicated by the OPEC basket price of crude oil which on average increased from US$61.08 in 2006 to US$69.08 in 2007 to US$104.61 in 2008 The increased oil prices affected the cost of production in all sectors as well as the cost of transportation. In July of this year the price of crude oil peaked at US$147.27 per barrel, but plummeted dramatically over the past few months to record US$67.81 per barrel as of October 31, 2008. This was reflected at the pump with the highest gasoline price of $18.59 per gallon being recorded before moving erratically downwards to under $10.00 in November. Today St Kitts and Nevis offers gasoline at one of the lowest prices in the OECS,” said Dr. Harris.

He said that the St. Kitts-Nevis Labour Administration cognizant of the implications of rising prices on all of citizens, particularly the minimum wage earners, has worked assiduously to reduce the cost of living and to preserve the purchasing power of vulnerable citizens.

Finance Minister Harris said the new price control initiatives are only the latest additions to Government’s solid track record in the provision of safety nets for vulnerable groups in St. Kitts and Nevis.

“We continue to provide free-of-charge school meals, uniforms, and textbooks to vulnerable groups and to pay examination fees for children from low-income families and at substantial cost to Government. In 2009 Government will undertake an assessment in order to ensure that the services provided are being felt by the targeted groups in our communities. We believe that if it is not felt then it is not happening,” he said.

Government he said is heartened that it was able to increase the minimum wage enjoyed by the lowest paid workers by 28 percent from $250 per week to $320 per week.