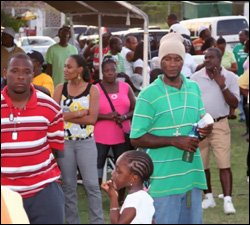 Nevis Premier, the Hon. Joseph Parry continued to welcome efforts which promote togetherness among the island’s residents. The most recent was a Labour Day Bash on May 3rd at the Cotton Ground playfield organized by the St. Thomas’ Nevis Reformation Party Constituency group.

“I am pleased that persons came out in their numbers and supported the Labour Day Fun day Bash which we are thinking about making an annual event, in an effort to promote the family unit and good community spirit,” he said.

The Bash which was designed to promote community togetherness and uphold traditions began at 11:00 am and ended at midnight.

The activities for the day included cricket, dominoes and musical accompaniment provided by the Odisi band of Bick Kiln and the Small Axe band of St. Kitts.

Patrons were also able to partake in many local delicacies including Johnny cakes, goat water, bull foot soup, cook up, souse and drinks.

The event was attended by a cross section of persons from across the island and there were no incidents reported.