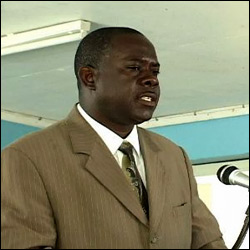 Meantime, Minister Hector noted that the team had also planned to meet with the 17 vocational trainees who are scheduled to graduate later this month. The students have been attending a three-month programme in various disciplined – plumbing and electrical, carpentry and masonry and auto mechanics welding at the Metal Construction Industries (MCI) in Trinidad.

“While in Trinidad, we would also take the opportunity to meet with the 17 trainees who are there pursuing vocational training. As promised by the Premier [Hon. Joseph Parry], we would have had two visits to see the progress of our students there. The Hon. Hensley Daniel visited last month and now it is my time where we can engage in discussion with the students and see how best we can assist them as they are there in Trinidad.

“Their graduation ceremony is scheduled for the 26 of July. I want to take this opportunity to wish them well and to say to the parents, that our preliminary report is that the students were doing well and we are expecting a very high percentage pass rate,” he said.