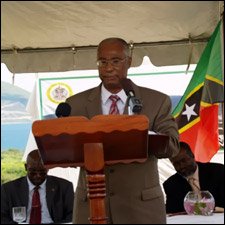 The First ever Eastern Caribbean Geothermal Conference began here in Nevis at the Mount Nevis Hotel on the morning of Tuesday, 30th June, 2009.  Premier of Nevis, the Hon. Joseph Parry said that this conference is unique for Nevis and timely for the people of the Eastern Caribbean.

Premier Parry noted that the possibilities which have presented themselves in the Eastern Caribbean, especially the islands of Nevis, Dominica and St. Lucia, have become numerous with the potential of geothermal energy.  “It offers the opportunity for investment, local jobs and revenue for further development,” commented Mr. Parry.

The islands of Dominica and St. Lucia have similar advantages to Nevis in terms of geothermal energy.  The pressure created by insecure domestic markets would be removed because cheap energy would be in great demand outside the borders of these islands in the foreseeable future.

“These islands have no obligation to compete against each other.  We are blessed not only by our location but by our neighbors’ location, so that each island has its own external market to satisfy,” remarked Mr. Parry.

The Premier felt that it was great that the islands could share information as the conference would afford them that opportunity. Delegates from the various countries would be able to share technical services, have exchanges and build and widen the geothermal energy development.

“An establishment of linkages is of major importance from this experience,” said the Premier. He continued by stating that linkages in the tourism, finance and education industries must be encouraged.  “We must have a place especially set up to hold seminars and training sessions at local, regional and international levels.”

According to Premier Parry, he hopes the seminar will kindle a spark of curiosity, incentives and creativity and that more Caribbean people become involved in the field of geothermal development and seek to benefit from industries that cascade from the by”“products of this form of natural energy.  He said that in a few years people will be able to identify this seminar, as the point where it all began.

Finally, Mr. Parry thanked all of the organizations who assisted the Nevis Island Administration for establishing the first ever Eastern Caribbean geothermal conference  – The Organizations of American States (OAS), the United Nations, the Government of Iceland, CARICOM, West Indies Power Ltd. and all other agencies who have supported the geothermal energy development on Nevis.