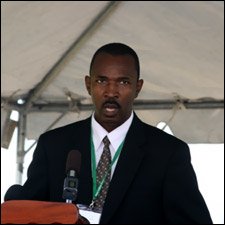 Head of a Regional Agency believes that the time has come for the region to transform its ways, to mitigate against the effects of climate change and an integrated energy and climate change approach, would be the most suitable method.

This observation was made by Chief of the United Nations Economic Commission for Latin America and the Caribbean (ECLAC) Ms. Catherine Gomes at the 1st Eastern Caribbean Geothermal Conference on Nevis on Tuesday.

She said since it was difficult to divorce climate change from energy use, the new approach would signal the launch of a new industrial revolution which would transform the way energy was produced and the type of energy used.

“The goal therefore is to move to a more climate friendly economy based on a combination of low carbon technologies and energy sources,” she said.

Ms. Gomes explained that while the Caribbean was highly vulnerable to the effects of climate change it was also full of unharnessed geothermal energy.

She pointed to the region’s potentially 19 active volcanoes with thermal energy which made them of interest for geothermal exploration.

However, despite the abundance of geothermal energy, Ms. Gomes stated that the resource had not been a priority in the energy policies in the islands governments.

“None of the islands have geothermal laws and many do not have laws for regulation of the electricity sector in particular. Limited financing and the high cost of exploration; the population and consequently the markets are small,” she said.

Ms. Gomes said too, that she was hopeful that the conference which concluded on Wednesday would serve to sensitise policy makers to the potential for exploring the geothermal resources of energy that were in their backyards and that the challenges that the region faced in doing so would be addressed.

Meantime, Caricom’s Programme Manager of the Caribbean Regional Energy Development Programme Mr. Joseph Williams who also spoke at the opening ceremony said the Caribbean region had the potential to supply more than 100 percent of its electrical needs from renewable energy and geothermal would significantly change the landscape of the Eastern Caribbean.

He said his organisation which had been given a mandate to develop a regional sustainable road map and strategy with regard to energy in the region recognised the possibilities that existed in St. Kitts and Nevis, Dominica and St. Lucia and the issues and challenges involved.

However, he said the matter of climate change presented a real opportunity for change in the type and use of energy used in the Caribbean, which would allow the region to be labelled a “Carbon Neutral Zone” or “Green Caribbean” that would not only bring value to the region’s negotiation powers but also provide a better platform for economic value.