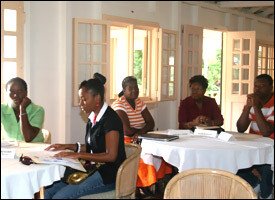 Nevis is host a number of stakeholders in the Federation’s tourism industry who are attending a workshop on Hotel Operations Management and Food and Beverage Management. The two-day Organisation of American States (OAS) sponsored event commenced on November 26, at the Old Manor Hotel.

During a brief ceremony to launch the workshop, OAS Representative for St. Kitts and Nevis Mr. Starret Greene told participants that no longer could the real dangers posed by the negative effects of climate change on the Federation and the Region’s tourism industry be ignored.

He said when the time, effort and resources that were invested in the development of the tourism product were considered, it was imperative that everything possible should be done to protect the critical and invaluable component of the tourism infrastructure.

“I wish to now call for changes to be made to the current designs of our infrastructure without delay.

“I feel obliged to use this occasion to also call on the owners of properties, governments, industry stakeholders, insurance companies, architects, engineers, construction companies, private sector partners and civil society organizations to begin discussions on the issue of adaptation, with a view to crafting a plan of action to address the vulnerabilities of our tourism infrastructure to the impact of climate change and the forces of Mother Nature,” he said.

Nonetheless, Mr. Greene said as he called for the adaptation to climate change he was mindful that it would be costly and which posed a major challenge for the Federation.

The OAS Representative pointed to the passage of Hurricane Omar six weeks ago which had caused major dislocations in tourism. He pointed to the temporary closure of the Four Seasons Resort which had been damaged by the hurricane which he stated had directly impacted the economy of Nevis and negatively affected the livelihoods of many Nevisians.

Meantime, Permanent Secretary in the Ministry of Tourism on Nevis Mr. Tyrone O’Flaherty commended the organizers and sponsors of the workshop and encouraged participants to make maximum use of the training opportunity.

He said the workshop was a means for the establishments involved to develop their human resource capacity, the most valuable asset in the Federation’s tourism industry.

The workshop’s facilitator is Master Hospitality Trainer and Catering Consultant Ms. Debbie Thomas. She is a certified Special Events and Dining Room Professional at the School for the Service Arts Inc. based in the United States of America.