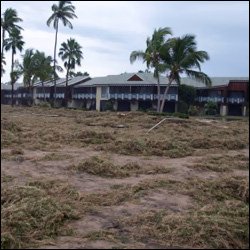 Premier of Nevis Hon. Joseph Parry said the role of the Nevis Island Administration (NIA) in the successful reopening of the Four Seasons Resort, Nevis was proactive and not passive.

Mr. Parry made the NIA’s position clear in an interview with the Department of Information, on the heels of a number of meetings with bankers, Four Season’s representatives and other stakeholders on Thursday.

“The government’s role cannot be passive, we have to be very proactive [and] try to come up with creative ways to help them to move forward in the interest of all so that the hotel can be opened before the end of the year,” he said.

The Premier said the NIA had gone beyond the stage of offering concessions and had to become an active partner in the interest of Nevisians.

Four Seasons General Manager and Regional Vice President Mr. Andrew Humphries described the discussions as positive. He said in the end emerged a spirit of cooperation which brought the timely opening of the resort closer with the requisite standards.

“We all agree that a teamwork approach to resolving some of the issues is the way to go forward. I have to say that everyone has indicated they are very willing and open minded as to how we can achieve that goal and willing to step up to the plate.

“So I think it’s a testament to the government and to the banks that we have managed to move that far so quickly,” he explained.

Mr. Humphries also noted that the Homeowners Association were also involved in the deliberations since the homeowners on the estate were very critical to the discussion.

The Resort’s General Manager said during the meetings, there were also several consultants who presented various plans for several matters including reinstatement of the coastal protection and reinstatement of the landscaping. Others presented ideas on how the feel of the resort could be modernised, all with the aim of completing renovation work in a fairly short time period.