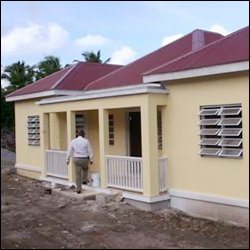 “Police presence in Nevis has been reinforced thanks to the Nevis Reformation Party (NRP) ““ led Nevis Island Administration (NIA),” said Legal Advisor in the NIA, Hon. Patrice Nisbett, when he addressed a well attended public meeting in Cotton Ground, on Saturday, 19th December.

According to Mr. Nisbett, the Police presence is visible as Constables police on foot and in patrol cars in the Cherry Gardens Housing Community and in other places in Charlestown and other communities.

“We are building police barracks in a number of villages around Nevis.  The reason there has been a limited police presence on Nevis was because there was not enough housing for the police.

“The Premier of Nevis, Hon. Joseph Parry has moved forward and ensured that there will be additional sleeping quarters for the Police.  This is a strategic plan to ensure the safety of the residents of Nevis,” said Mr. Nisbett.

Meanwhile, the Premier of Nevis, the Hon. Joseph Parry visited the construction site of the Butlers Police Barracks to get a first hand look at the new sleeping quarters.

The Premier remarked that the housing facility was spacious, comfortable and well placed with a view of the mountain and sea.

The Butlers Police Barracks are situated on just over a quarter of an acre of land. The land was given to the NIA, compliments of Ken and Arthur Evelyn and the project is being developed  by Ken Evelyn’s Construction company.

The barracks, when completed, will comprise of four bedrooms, two bathrooms, a front and back porch and a large storage room.

In addition to donating the land and constructing the barracks at a very reasonable rate, Manager, Ken Evelyn has pledged to also donate the furnishings for the barracks.

Mr. Evelyn said he is working with government to make sure that the project goes well and the policemen are comfortable in their new surroundings.  “I believe that government alone cannot end crime and it is up to the residents of Nevis to play their part.”