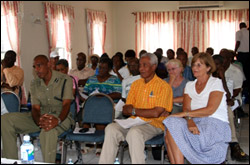 Minister with responsibility for Agriculture on Nevis Hon. Robelto Hector described a Department of Agriculture hosted consultation for interest groups on Animal Control on Nevis, on May 29, 2008, as timely. He told stakeholders that their suggestions would become a part of the Nevis Island Administration’s (NIA) way forward for the control of animals.

He said the consultation had come at a time when the Administration through the Department of Agriculture, had placed great emphasis on the importance of food and animal production in order to meet the needs of a growing society

“Let me say to you, that at this time also, there is a heavy concern as to the humane treatment of animals throughout the world. I would ask you today for us to have frank discussions. Your suggestions would be a part of the way forward in this regard.

Director of Agriculture Dr. Kelvin Daly told the participants that the Department was forced to address the problem of animal control because it had become highly problematic.

He said it was because the Department did not hold all the answers to the problems related to animal control that the decision was taken to hold the consultation in an effort to seek suggestions to have a definitive policy on the long standing matter.

“I remember earlier up in the year I said to my Minister we have to do something urgently because here we are on one hand encouraging persons to plant more food and on the other hand they are getting frustrated because of the problems of wild animals or even domesticated animals causing problems in the livestock and root crops industry.

“So this morning we are hoping to get ideas, I hope you came with your thinking caps because we at the Department don’t have all the solutions to deal with this national problem,” he said.

Meantime Legal Advisor in the NIA Mr. Patrice Mr. Nisbett gave an overview of the existing legislation which dealt with varying measures of animal control on the island. He explained that the Nevis Island Assembly held exclusive legislative competence to deal with matters of agriculture and matters to deal with animals and did not have to wait on legislation from the Federal Parliament to deal with animal issues in Nevis.

Mr. Nisbett said the existing legislation suggested that there had always been a struggle between the cultivation of crops and livestock production and pointed to key areas in which legislation was passed to deal with the matter.

“There has always been in our society a constant struggle between cultivating crops and the raising of livestock. The way that we have dealt with it from a legislative point of view is that we have adopted from my own classification maybe about four things that we have done to control animals.

He also spoke on the burning issues of stray animals and marauding monkeys which had destroyed root crops. He said though there was legislation to deal with the matters he was of the view that they needed to be enforced and upgraded.

With regard to the protection of animals, the Legal Advisor said though there was legislation that dealt with animal cruelty in St. Kitts and Nevis it was not adequate.

“We do have some legislation in St. Kitts and Nevis which deals with cruelty to animals to my mind the legislation as it stands is very inadequate to dealing with the challenges that we face in our society today as we advance.

“So maybe one would have to look at the legislation and review it so as to bring it up to the standards that are expected of any developing society in relation to the humane treatment of animals. Let me end by saying that particular legislation makes it a criminal offence to administer any noxious or poisonous substance to animals. I think we do have complaints of that in our society from time to time, he said.