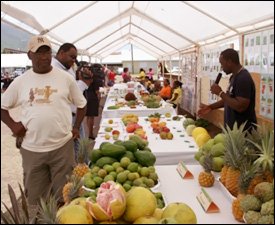 Fruits On Display at The Nevis Fruit Festival 2009

He described the event at the Villa Grounds in Charlestown, as one designed to portray the richness of fruits and their economic potential and urged persons to plant fruit trees.

“The event is a time when we also focus on nutrition”¦as the healthier a nation is the morre productive it is,” he said.

“Nevisians by far eat too little fruit they tend to eat more processed foods than anything else so we are here to promote the eating of healthy fruits which are quite available and promoting the growing of fruit trees,” he said.

Dr. Daly dispelled a common thought that it took a lifetime for fruit trees to grow and produce.

“It is not so. We have mango trees that can grow in three or four years, we have carambola in two years, wax apple in a year and a half so it is not a difficult thing to do. So if you come by the Department of Agriculture in Prospect, we have a number of fruit trees available for you if you don’t see what you want we can get it for you.

“We are asking persons to eat healthy. All the information is here to show the various uses of these fruits and we are hoping that persons will listen and ward off diseases that have come amongst us in the last decade or two because we have strayed away from what works, which is healthy eating and healthy living,” he said.

Meantime, Legal Advisor in the Nevis Island Administration Hon. Patrice Nisbett who was also present congratulated the Ministry and Department of Agriculture for hosting a successful Fruit Festival.

“I believe that it’s a clear demonstration and an indication that agriculture is in fact alive and well and contrary to what people believe and what people think, one can be successful at agriculture in a pretty short time, once one is truly dedicated and committed,” he said.

Mr. Nisbett said he was pleased with the various produce and products that were on display and available for sampling and was hopeful that the annual festival would continue to grow from strength to strength.