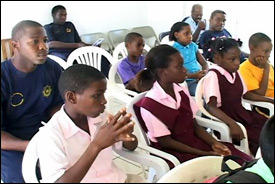 Permanent Secretary in the Premier’s Ministry Mr. Joseph Wiltshire, on Wednesday July 09, commended the members of the St. Kitts – Nevis Fire and Rescue Services for their initiative in hosting a Summer Safety Programme for primary school students on the island.

The workshop was this year being facilitated under the theme “Making a safe tomorrow through the eyes of our youth” and was expected to cover topics in the area of fire, traffic and water safety.

Mr. Wiltshire’s remarks came at the opening ceremony of the fourth annual safety programme held at the Newcastle Fire Station.

He also offered encouraging words to the students who came out in their numbers to learn more about safety.

“The Fire Summer Programme started initially in St. Kitts after there were a lot of house fires. After these fires were investigated it was then recognised that most of these fires were caused by children.  The Fire Services recognised the need to educate the children so an idea came to one of the officer’s mind, why not have a summer programme and a programme was started,” Mr. Stapleton said.

He added that the programme was deemed successful after the number of child-related fires was drastically reduced in the few months following the first programme.

Director of the Nevis Disaster Management Department Mr. Lester Blackett was among the invited guests at the opening ceremony and recorded his commendation to the organisers for hosting the event.

Surrey Paving and Aggregate, Four Seasons Resort Nevis, Beyond Homes, Lefco, S. Hunkins and Sons, St. Kitts and Nevis Social Security, St. Kitts and Nevis Trading and Development Company (TDC) and S.L. Horsfords and Company Limited were among the sponsors for the event.