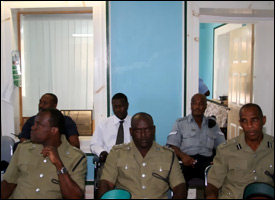 The Nevis Island Administration (NIA) has reiterated its commitment to support the Police in every way, including the provision of the necessary assistance to help them perform their duties effectively.

Premier of Nevis Hon. Joseph Parry along with other Cabinet members, met with senior Officers of the Royal St. Christopher and Nevis Police Force, Nevis Branch, on July 10 to discuss crime on Nevis.

Minister Parry, who also holds responsibility for Security in the NIA, said that the matter was an important one that needed to be addressed.

“The Cabinet of the Nevis Island Administration representing the people of Nevis have heard the grave concerns that have come from the public, regarding the certain outbreak of criminal activity that has been taking place for the past few weeks,” he said.

According to Premier Parry, the NIA would continue to work closely with the police as well as with Prime Minister Hon. Denzil Douglas and the Federal Government to ensure that there is an improvement in the crime situation on the island.

“We do believe that we need to work with the police in an effort to solve this problem and we know this is what the public wants and is what they want immediately.

“I must assure the public, however, that I have the fullest confidence in the police and that the police have been working very hard both on the island of Nevis and along with their colleagues in St. Kitts to try to arrest this problem.  I myself have been in contact with the Second in Command on the island of St. Kitts and I have spoken to the Prime Minister about this matter,” Mr. Parry said.

The Administration and the Police urged citizens, residents and visitors to be particularly vigilant and to take necessary measures to guard against criminal activity during the festive Culturama season.

“I advise the public to be vigilant, to observe what is taking place around them, to look at strange faces and strange movements in villages and communities and to contact the police immediately to give them the information,” Premier Parry said.