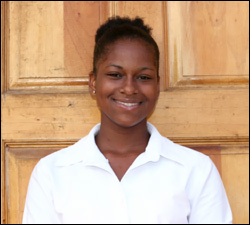 Sixth form student at the Charlestown Secondary School [CSS], Khalin Nisbett captured the first place award with her submission on the topic “Culture and the Arts should be an integral part of our Tourism product.”

This year makes three consecutive years that the Charlestown Secondary School has captured the first place award with Kalea Clarke and Shelisia Glasford winning in 2008 and 2009 respectively.

Chaim Walters who represented the Gingerland Secondary School placed second. He wrote on the topic “the Caribbean Court of Justice is a necessary institution for Caribbean Independence.”

The OECS essay competition, which is open to students aged 14 to 19, began in 2001 and forms part of the Eastern Caribbean Central Bank’s Community Outreach Programme.

Corporate Relations Officer at ECCB, LaFleur Dublin told the Department of Information that she was pleased with this year’s level of participation and compared it to last year’s competition.

“The participation of students in the 2010 OECS Essay Competition showed a slight improvement with a total of 328 entries submitted compared with 321 entries in 2009,” she said.

Dublin also described Nisbett’s essay as “engaging” and commended her for the submission.

“Khalin’s essay was engaging as she put forward her arguments in a convincing manner. In particular, she provided suggestions for the inclusion of culture and arts in the tourism product,” Dublin said.

Third place in this year’s competition went to Karishma Dhera of the Montserrat Secondary School.