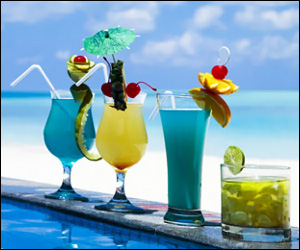 A new dimension has been added to the Pre-Culturama 40 calendar of events with a Bartenders Contest slated for downtown Charlestown on July 04, 2014.

Organizers say the new drink will be recognized as the signature drink for this year’s Culturama festival.

That disclosure came from Chairman of the Culturama 40 Central Committee Deborah Tyrell who was accompanied by local chef and contest organizer Michael Henville, when they spoke to the Department of Information on June 12, 2014.

The competition is to encourage persons to make up their own recipe. You have a recipe, maybe you have created a drink at home or in a bar where you work and you think that this drink is unique. It’s an energy drink we are focusing on because it’s Culturama 40 and we’ve got more than 40 hours of events going on.

“The Culturama Committee came up with the idea to do an energy drink competition so that we can have something showcased that’s local and that’s one of the criteria. It should have a local ingredient. Your drink has to appeal visually so color, brightness, local ingredient,” she said.

When asked about the prize for the competition’s winner, Tyrell explained that a prize would be awarded but she was not yet in a position to reveal what it would be. Nonetheless, she urged persons to think of the other benefits which could be derived if they participated.

“You are going to own this drink. You are putting a drink together and you are showcasing a drink that you are creating and designing. Yes, there will be a prize at the end. At this point in time I cannot say what that official prize is yet.

“I think a key element of the success of this is you showcasing your drink. You’re bringing it forward and saying this is my entrant into this competition. I made this drink, I am proud of it, I am proud of putting it together and I want other people to taste it,” she said.

Meantime, Henville gave more insight into the new contest he was spearheading and spoke of the talent which existed in that area on Nevis.

“It must have a local ingredient and it must showcase the talent. I know there is lots and lots of talent on this island and I know there are some very talented bartenders, male and female that really may just be waiting for a chance like this to showcase what they are made of and this will be their chance to really show us what you are made of and help us to promote the competition and Culturama,” he said.

According to Henville, there would be more than one winner at the end of the contest.

“There will be two winners. The main winner will be the person who wins for the Culturama Drink, the C40 energy drink and then there will also be a winner for People’s Choice.

“It is very important to own the drink, it does not even have to be the winning drink. All the bartenders that participate in the competition, this is your own, so own it and even though it is not the winning drink, it is still something you can make popular yourself and then you can be known for that special drink,” he said.

Regarding registration for the contest, Henville noted that there were several ways in which persons could sign up to be a part of the contest.

“To register, you can contact myself or Ms. Tyrell and we will put you down on the list and as it gets closer to the competition, we will let the contestants know the different rules and regulations.

“We are also going to have registration via the social media. So you will see this on Facebook, on www.culturamanevis.com and you can register through those means as well,” he said.

In response to an invited comment regarding his area of expertise, Henville said he had been serving in it for some time.

“I have quite a bit of working experience and life experience in the culinary / hospitality industry. I have been cooking in the kitchen professionally for at least 15 years now.

“I do have also experience in bar tending and cooking and baking competitions which I have won a few as well in the past which I am proud of. So I am happy to lend my services to this Bartenders Competition and Culturama as a whole,” he said.