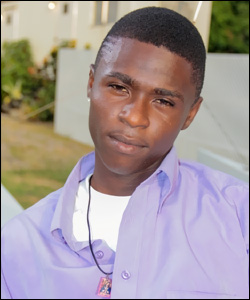 Roaring like a lion! Daquani Newton is alert and ready to accept the challenge of competing in this year Mr. Kool Contest.

Born on July 27th, 1992, he carries the king characteristics of a true Cancer”¦ confident, humble, talented, charismatic and, most of all, an indomitable will to win.

Known to several acquaintances as a bold, courageous teenager, it is evident that Daquani’s appreciation for talent and desire to be an ambassador for his county were the driving forces behind his decision to enter the 2012 Mr. Kool Contest.

Daquani, also known as Ziggy, considers himself to be very optimistic and it is with this determination that he will thrive to fulfill his goal of becoming a professional dancer. He can be seen on several occasions displaying the latest rhythmic dance moves that originate from world renowned Jamaican reggae artists. Other activities that he takes pleasure in are playing football and basketball.

This young, fresh face from Stoney Grove has his mind set on relocating to England. There, he believes, his dancing skills and natural talent will receive much more attention.

This immensely popular young man, whom we all know and love on stage, is currently employed as a waiter at Legend’s Restaurant.

Daquani is no stranger to the stage. He was the winner of the 2006 Mr. Charlestown Secondary School [CSS] Contest and has been a member of several dance groups on the island.

Daquani’s message to young men who are interested in pageantry is “stand tall as a leader, not a follower” and “turn the negative criticisms into positive opportunities”. “Remember, with hard work and determination, you can achieve your goals. Much love!”

You are invited to the Nevis Cultural Complex on Sunday 29th July 2012 to see Daquani Newton vie for the 2012 Mr. Kool title.