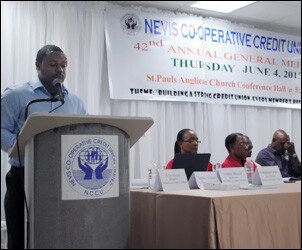 President of the Nevis Co-operative Credit Union (NCCU) Limited, Mr Collin Walwyn, told members that in 2014 the society faced international, regional and local challenges, but it has responded with the aim of offering relief to the members.

Mr Walwyn, who was delivering remarks at the society’s 42nd Annual General Meeting (AGM) held on Thursday June 4 at the St. Paul’s Parish Conference Hall in Charlestown, named the challenges as new legislation, regulations, and guidelines relating to capital adequacy, anti-money laundering, and the exchange of tax information with the USA under the law, Foreign Account Tax Compliance Act (FATCA).

Locally, the President observed that the high rate of loan delinquency “has negatively impacted profitability of the society by reducing interest actually earned and requiring significant provisioning for losses due to loan impairment in accordance with International Financial Reporting Standards (IFRS).”

However, Mr Walwyn informed the members: “Your Board has responded to the challenges with the aim of reducing the impact on your credit union through the implementation of new initiatives such as providing relief to members by way of reduced interest rates on general loans and mortgages.

“The goal of the initiatives implemented was to improve the financial performance of your credit union by building on current strategies to increase income, reduce expenses, increase surplus and build institutional capital.”

Treasurer, Mrs Catherine Forbes, advised the membership that in spite of the need to make significant provision for non-performing loans and its negative impact on income, the society recorded a modest operating income of $934,173 in 2014.

“The society performed favourably in 2014 due in part to your Board’s commitment to implement new initiatives and strategies,” said Mrs Forbes. “The improved performance was helped by a buoyant economic climate that resulted from programmes initiated by the Government of St. Kitts and Nevis to address fiscal, debt restructuring and structural reforms issues in conjunction with the International Monetary Fund, supported by the Sugar Industry Diversification Foundation.”

There were mixed feelings after a resolution that was read by President Mr Collin Walwyn advised that there would be no payment of dividend for the year 2014 occasioned by implications of  Section 129 (2) (b) and (c) of the Co-operative Societies Act, 2011 of St. Christopher and Nevis which stipulates that a co-operative society shall not pay a dividend or make any payment on account out of surplus until its institutional capital has reached a proportion of not less than five per cent of the total assets of the co-operative society.

General Manager of the Caribbean Confederation of Credit Unions (CCCU), Mr Ralph Wharton who was present, rose to explain the implications of the Act which he termed a “Ëœmoving target’ because once assets grow, the amount of capital will always grow and when that happens credit unions won’t be able to pay dividend.

“Do not beat the Board, do not beat the regulators, it is the law,” advised Mr Wharton. “There are some proposals that have been made to revise the law. Have a little patience we are going to move as quickly as possible to have the law amended but until the law is changed, you will the same thing every year, no dividend. It is a legal problem which we have to fix.”