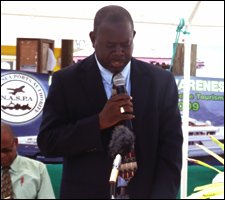 The Port Authority on Nevis was commended for its effort to educate the public on the role it played in the island’s marine tourism industry.

Fisheries Minister on Nevis Hon. Robelto Hector applauded the Nevis Air and Sea Ports Authority (NASPA) during its recent programme of Marine Awareness, under the theme “Bridging the Gap to Marine Tourism”.

He said the event had come at a time when small island states were seeking ways to eliminate structural differences and other socio economic factors which negatively impacted tourism as a tool for long term sustainable development.

“It is the time when we ought to begin to broaden our diversification efforts. Nevis is a beacon in the Caribbean and a very good example of a Caribbean country which has embraced tourism as an important tool for socio economic development.

“Indeed, for us tourism can be viewed as a quick and reliable source of much sought after foreign exchange; as a source of job creation and more importantly a link to our agricultural sector, fisheries, forestry and construction and handicraft industries,” he said.

The Minister said that marine activities had found great importance in the tourism sector of other countries and their overall development and cited that it provided a complementary source, which ensured development.

However, Mr. Hector pointed out that although it was generally felt that as much as 75 cents of the dollar went to foreign entities to pay for commodities which supported the tourism industry.

He said while diversification efforts were broadened, the dollar value on the tourism product should be saved to ensure less leakage.

“Our farmers should make every effort to supply the hotel with produce consistently. The government of which I am a part of is supportive of this activity. We boast of a fishing industry that contributes some $6 million to our economy on an annual basis.

“Now is the time for our fishers to broaden the scope of the operations to meet the demands of marine tourism”¦I make an appeal to our fishers to become more innovattive and start thinking of ways to extend your business”¦think of creeative ways to expand your marine activities. Take maximum advantage of the opportunity to become involved in marine tourism,” he said.

The Fisheries Minister also urged persons who sought to utilise the marine environment and reminded them that they should exercise caution and not destroy the island’s fragile marine eco systems.

He said Nevis should learn from the mistakes of other islands who had allowed unplanned and haphazard mushrooming of the tourism hospitality facilities, in fragile costal marine eco systems.

Mr. Hector further stated that overcrowding and high concentrations of visitor had led to the destruction of coral reefs and the overfishing of marine resources.