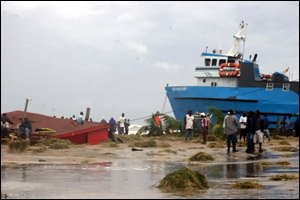 Nevisians returned to work today after having breathed a sigh of relief yesterday, as the island received just a brush from Hurricane Omar. Premier of Nevis Hon. Joseph Parry who also has responsibility for security, announced on October 16, that despite minimal damage, the island’s tourism industry was open for business.

He reported that the Four Seasons Resort had been temporarily closed but all hotels remained intact and their guests were safe.  The Double Deuce Beach and Sand Dollar Beach Restaurants suffered heavy structural damage and Chevy’s Beach Bar on Pinneys was completely demolished.  In addition, the Nevis Air and Seaport Security hut, also at Pinneys, was removed from its foundation by the swells.

There was, however, heavy coastal damage along Gallows Bay, Pinneys Beach and Cades Bay, as well as the main seaport Charlestown Pier.  Some residents of Low Street were evacuated by emergency crews to safety.

Two ferries were beached and the ferry service between Nevis and St. Kitts was suspended.  The airport was closed but later re-opened. Much of the island suffered a loss of power but 95 percent of which was restored by late afternoon.

The Alexandra Hospital reported no casualties or emergencies.

Special teams from Disaster Management, the Police and Nevis Electricity Company Ltd. were on the move from early morning, carrying out assessments of the impact of the system in various communities and reported to the media houses.

Nevisians from all walks of life made the trek to Charlestown to get a first hand view of the damage, many of them remained there until late evening.

Private clean-up crews were also seen assisting with the clearance of debris and fallen trees, which caused the closure of a number of roads in the Charlestown area, with resulting traffic diversions.

Mr. Parry had met late yesterday with Nevis Disaster Management officials, to be updated on their assessments of the damage due to Hurricane Omar. He thanked disaster management officials and all others who were responsible for having returned the island to a state of normalcy.