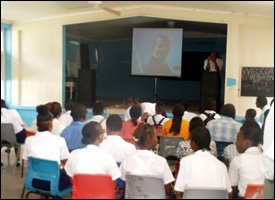 Minutes before the historic swearing in of America’s first black President, Premier of Nevis, the Hon. Joseph Parry said, “It is a great day for Black people all over the world, as we understand the importance of Barack Obama being sworn in as the 44th President of the United States.”

The Premier further stated that it is very important that parents, teachers and community leaders talk continuously about this occasion to young people so they could understand that they can achieve whatever goals they wish.

Meanwhile, residents all over Nevis paused to witness this historic event at schools, bars, offices and at the public library in Charlestown.  The anticipation of an event, not expected in our lifetime was electrifying.

The moment President Barack Obama took the stage to take his oath, the large crowd of young people who watched the inauguration on a big screen television at the Charlestown Secondary School, clapped and shouted:

Hooray!  Their excitement was infectious.

Mr. Parry commented that much like the 2006 elections in Nevis, the United States 2008 Presidential election saw a record number of people between the ages of 18 and 20 coming out to vote, marking a significant contribution made by the younger generation.  According to the Premier, this outpouring of support for democracy only serves to strengthen our resolve for a better and brighter future.