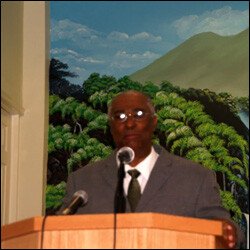 Premier of Nevis, the Hon. Joseph Parry, addressed over 150 participants at the Shiloh Baptist Church’s Non-Nationals Appreciation Day, held under the theme: “Running the Christian Race”.  The event, which took place at the newly constructed sanctuary in Ramsbury, Nevis on Sunday morning, was also attended by a contingent from the Nevis Island Administration.

During the service, which has been celebrated over ten years now, many individuals expressed their cultural pride by wearing the national dress of their homeland.

The Premier grasped the opportunity to spread the tidings of togetherness.  “We live in a small society; let us not be divided because of race or because we are from different countries,” he exclaimed.  “If we have little sections of various cultures, this is not good; tension will lead to chaos,” he told the attentive congregation.

In an effort to highlight the advantages of unity among Caribbean people, Premier Parry alluded to the recent West Indies vs England Cricket match, which ended in a win for the West Indies on Saturday. He said that it was truly wonderful to see Caribbean countries working together, with a common goal.

While speaking on the role of parents, Premier Parry said it is important for parents to have time for their children.  “Quality time is important and by doing this, we can show love and guidance to young people,” he said.

Mr. Parry reminded the gathering that materialism and trying to resemble the United States have made many Caribbean people move away from the typical practice of love and togetherness.

“At a time like this, it is important that we step back and reflect.  We must always make time for our children and families. Through this, we will make our children better students, better citizens and better family members.”

Premier Parry asked the congregation to teach the children about Agriculture, good nutrition, togetherness and respecting the environment.

The Premier concluded, “If we have strength and a great belief in God, we will come through any challenge!”