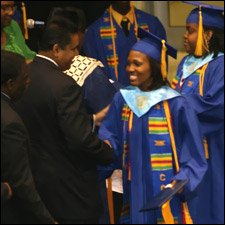 Prime Minister Douglas dedicated the first half of his one-hour weekly radio programme “Ask the Prime Minister” to the late Kittitian by playing four of the songs which catapulted her to stardom when she won judged the 2005 Kittitian Superstar at the age of 14.

Describing the past two days as “sad” for the thousands touched by the gifted Kittitian teenage sensation, Prime Minister Douglas expressed his profound condolences to the family “for the loss of such a talented life.”

“One that has been snuffed out from us at such an early and tender age and one who held such tremendous talent,” Dr. Douglas told listeners to the programme which is carried on ZIZ Radio, Kyss FM, Radio One and Sugar City Rock.

Prime Minster Douglas joined United States Virgin Islands Governor the Honourable John P. DeJongh who spoke of the loss being deepened by the knowledge that the full potential of Karence’s life would never be witnessed and “we will all be less fortified of not having the benefit of what her life would have been if it has continued on the path that we have seen so far.”

“This is really a sad moment for all of us, “said Prime Minister Douglas.