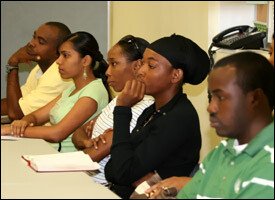 A number of Nevisians will benefit from a five day workshop on Emergency Care and Treatment which commenced on November 24 at the Llewellyn Newton Disaster Management Facility at Long Point. The training sponsored by the Disaster Management and the Ministry of Health, targets a number of key private and public sector personnel.

Minister of Health in the Nevis Island Administration (NIA) Hon. Hensley Daniel who formally launched the activity, facilitated by the Pan American Health Organisation (PAHO), said the continued training of persons on Nevis to respond to disaster represented the best investment.

He expleined the Government could purchase modern equipment, erect large buildings and secure large amounts of basic food supplies but if persons were not adequately trained the return on investment will be less than satisfactory.

Mr. Daniel further underscored the importance of the training which he said would ensure that injuries were treated speedily.

“Given the cost of medical care and the pressure on human resources in the Ministry of Health, it is imperative that treatment be applied speedily. When the cost of hospitalization, medication, diagnostic services is combined, it underscores the importance of this course,” he said.

The Minister referred to some of the 13 modules including Lifting and Moving Patients, Basic Injuries and Treatment, Kinematics of Trauma which he noted allowed for a widened and deepened knowledge on health care.

He told participants that they should regard the workshop as an opportunity that would allow them to work with a team and thereby enable them to function effectively in time of disasters.

Mr. Daniel also pointed to the collaboration between the Ministry of Health and the Disaster Management Unit, which he described as a wrap around concept.

“When we recognize the need for the wrap around concept in the planning and execution of programmes we are on our way to maximizing scarce resources.

“The Drag Racing Unit has established collaboration with the Health and Disaster Management for the upcoming weekend of races. If the collaboration is strengthened, government can be made smaller, efficiency improved and services will be delivered on time,” he said.

The Minister also thanked PAHO and assured of the NIA’s continued willingness to partner with the organization as it sort to reduce the impact of disasters on the island.

Other remarks came from Lecturer in the Department of Community Health, University of the West Indies and PAHO Senior Instructor Mr. Delwin Ferguson and Director of the Disaster Management Unit Mr. Lester Blackett.