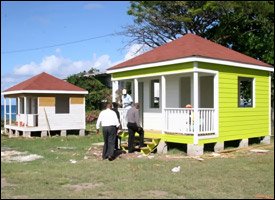 An Artisan Village under construction next to the Cultural Center on Old Hospital Road in Charlestown, will provide visitors with greater access to 18 of the island’s craft vendors. The initiative by the Ministry of Tourism which is in its first phase of construction will also centralize the island’s artisans.

Permanent Secretary in the Ministry of Tourism in the Nevis Island Administration Mr. Tyrone O’Flaherty told the Department of Information on December 5, 2008, during a tour of the site, that the Village would serve to provide genuine Nevis branded products.

Meantime Tourism Development Officer in the Ministry of Tourism Ms. Nicole Liburd said the Ministry was working with assistance from the Organisation of American States (OAS) and cited that much research was undertaken.

“We would have done in-depth research with a number of Caribbean Islands and we are hoping that our concept would bring a bit of the Nevis flavour, therefore, we have used the concept of the chattel houses.

“So far there are six houses under construction but on completion there will be seven, We would incorporate a lot more trees indigenous to Nevis for shading purposes and to bring some beauty to the area,” she said.

Ms. Liburd further explained that a lot more landscaping will be done to the area and would also include paving stones and walkways.

She said plans for the Artisan Village also included the incorporation of some historical information about the grounds and the structures that are currently on the property.