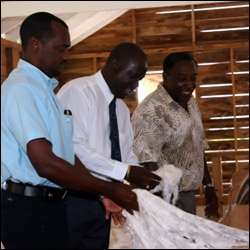 Minister of Agriculture in the Nevis Island Administration Hon. Robelto Hector expressed satisfaction with the performance of the Department of Agriculture on Nevis  for its successful revival of cotton production after a four year absence. The crop he said was one filled with export potential for the island.

The Minister made the comment on May 19, 2008, while he toured the Sea Island Cotton ginning operations at the New River Ginnery. He was accompanied by Director of Agriculture on Nevis Dr. Kelvin Daly and Small Farm Equipment Pool Manager Mr. John Parris, overseer of the ginning operations.

“I am extremely happy with the performance of the Department in realising a cotton crop this year. As I have said, we must export something and truly we are seeing once again the revival of an export crop which can generate foreign exchange for this country.

“As a government we are committed. I want to take this opportunity to thank the Director, the Ministry of Agriculture and the farmers who participated in making this crop a success,” he said.

Dr. Daly explained that the cotton was being prepared for export sometime during the summer months and explained that the crop was a successful one when considered that they were out of production for four years and the Department began the project from scratch in 2007.

Despite the success of the crop, he pointed to a number of challenges which had been encountered along the way.

“Our biggest challenge is we started from scratch having to find new areas to plant and having to clear the acreage at Indian Castle; having problems early with the weather patterns; problems with the harvesting not enough labour came forward early enough and we lost some percentages due to some inclement weather earlier on with the crop during harvesting.

“You know you can’t control Mother Nature, you win some and you loose some but we are ecstatic with the success given the fact that “¦ we have taken nothing and made something and we started from way back and came forward and the Ministry and Mr. Hector have a lot to be proud of because we got much support from him and the Premier of Nevis Mr. Parry,” he said.

Notwithstanding, Dr. Daly said the Department had not been fazed by the challenges but instead looked forward to replanting a second crop of cotton later this year in late August early September.


“The idea for planting for next year is very exciting to us we are looking to even bigger productions for next year  and as the Minister quite correctly indicated cotton once again is going to put Nevis back on the map of export countries.

“Before this intervention of cotton, we produced nothing for export and here we are little Nevis back in again after so many years of absence. So we are inviting farmers next year to plant with us, to plan with us and to make some serious money from a very, very lucrative crop. We look forward to hearing from you and next week we will start ginning farmer’s cotton and those farmers who have their cotton nicely bagged please have it delivered here at New River by Next week Monday or latest by the weekend,” he said.

The Agriculture Director confirmed that 38 acres of government lands were cultivated with cotton while six acres were under cultivation by private farmers. He said the Department hoped to have more farmers move to cotton cultivation than government farms.

Dr. Daly said the demand for cotton especially the Sea Island Cotton was quite high and a lucrative market and the Administration had planned to get top dollar for Nevis producers.

For this year’s crop the cultivation on government owned farms yielded about 22, 000 pounds of raw cotton.