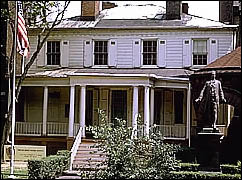 Alexander Hamilton lived at this New York City address from 1802 until 1804; the house will soon be moved.

The Greek revival house, designated a National Historical Landmark in 1960, was built in 1802 on a promontory that provided panoramic views. Designed by John McComb Jr., who designed New York’s City Hall and Princeton Theological Seminary, the 1802 Grange is the only remaining example of his residential buildings.

The relocation process began in 1995, when the park service concluded a General Management Plan that recommended that the Grange be relocated and restored in the northwest corner of St. Nicholas Park on land that had been part of Hamilton’s original 32-acre estate. Planning for the project began in 2004, construction began in November 2007, and the building is expected to be completed in Spring 2009. The actual move is estimated to take approximately 12-15 days, and Congress has predicted that it will cost about $8.2 million.

The National Park Service’s decision to relocate Hamilton Grange has the support of city organizations like the Department of Parks and Recreation and the New York City Landmarks Preservation Commission. According to Darren Boch, National Park Service spokesman, “The NPS developed plans for the building’s relocation, keeping in mind National Register Guidelines for relocating structures: that ‘every effort be made to re-establish historic orientation, immediate setting, and general environment,’ as well as accurately restore the Grange’s architecture in a manner that respected the symmetrical exterior elevations.”

Regardless of ongoing progress on the project however, others are adamantly opposed to the relocation, which will reorient the house on a busy street.

“Alexander Hamilton designed the Grange to face southwest, toward the sun, toward the city, and the complete turnabout of his solar orientation casts into shadow the originally designed mirrored panels … and turns it to face a noisy, heavily trafficked street. It’s just bizarre,” says Carolyn Kent, a local preservationist. “When you reverse it, you have the dining room with the mirrored panels facing right into a wall.”

Says Boch, “Some individuals have expressed their strong conviction in siting the Grange in its original compass orientation, facing southwest, as paramount to other considerations.”

According to Kent, five community groups have contacted the National Park Service’s Northeast regional director to challenge the plan now under way. “This is not just a few individuals,” Kent says. “The orientation now scheduled completely contradicts that put forward by NPS in the final general management plan published in 1995.”