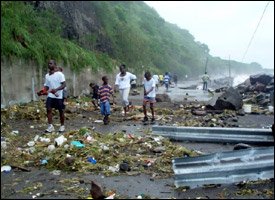 The National Emergency Management Agency (NEMA) is encouraging residents of St. Kitts and Nevis to remain vigilant as the hurricane season continues.

Last week, the coastline of the twin-island Federation was battered by the Category 3 Hurricane Omar, which passed 120 miles northwest of the islands.

National Disaster Coordinator Carl Herbert said he was pleased with the response of the public in preparation of the storm, dismissing the fears by some that the absence of a hurricane impact in almost a decade has encouraged complacency.

“It was never a concern,” he stressed on SKNIS’ radio programme, Perspectives.

The fact that some may now feel that the worse of the 2008 Hurricane Season is behind us, is more troubling for the NEMA official. That may not be the case.

“The hurricane season officially ends on the 30th of November, but I recall last year that there was a [tropical storm] that formed in December,” Herbert cautioned. “We have seen that weather patterns have changed around the world and so I would like to encourage persons to be prepared.”

That storm was Olga which formed on December 11 and dissipated two days later. The more recent trend of out of season systems started earlier that season (2007) when Subtropical Storm Andrea formed on May 09. This year, Tropical Storm Arthur kicked the 2008 season off early forming in late May.  The hurricane season begins on June 1.

“I want to encourage persons that still may have supplies [left over] from the preparation of Hurricane Omar not to waste or lavishly utilize items, but to keep them because we are still in the hurricane season,” warned the National Disaster Coordinator. “Pay close attention to the local media, and please stay prepared.”

Meanwhile, recovery efforts continue. Cabinet was briefed by Mr. Herbert on Monday, who detailed damage estimates and humanitarian relief being provided to the few that were affected.

Cleanup efforts will kick into high gear this Saturday, to clear affected areas where work is not complete. Residents of St. Kitts are being asked to join in the National Community Clean-up Campaign which covers coastal areas and villages in Fig Tree and Pump Bay in Sandy Point as well as areas between New Guinea and Old Road.

NEMA’s Public Relations Officer Goldwyn Caines thanked the civic minded individuals and agencies that have pledge to support the effort. Special mention was made of the heavy equipment association which has committed manpower and resources free of charge.