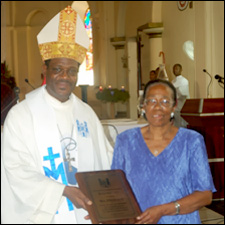 Principal of the Secondary Division of the School, Mrs. Lisa Pistana in reading the citation noted that Mrs. Grey, born on September 17th, 1943, is the eldest of 7 children and her experiences as an older sister played a big role in her chosen vocation as a teacher.

“After graduating from high school, she started teaching at St. Theresa’s Convent School in January of 1962.  She was assigned to Form 3, teaching all subjects.  During the early 1970s she gave birth to two daughters, Chloerissa and Marijka, before continuing her tertiary education.  After graduating from the College of the Virgin Islands in 1980 with a Bachelor of Arts Degree in English, she served as Principal of St. Theresa’s Convent School for 10 years – 1981 to 1991.  Then she pursued a degree in Pastoral Counseling from Neumann College in Pennsylvania and after having graduated with a Master of Science Degree returned to St. Theresa’s as a teacher and counselor in 1993.

Throughout the years, Mrs. Grey has been very active in the St. Kitts Girl Guides Association, the St. Kitts Netball Association, and St. Kitts Carnival (where she was the driving force behind the St. Theresa Convent School’s Majorettes that led the Carnival parade annually).  She has also been involved in nurturing undiscovered talent, whether she was encouraging young ladies to enter the St Theresa’s Convent Teenage Pageant, urging young calypsonians to write lyrics after her English class, or hiring the acts, such as the  “Small Axe” band (back then they were the Vibrational Roots) to appear on the show.

Mrs. Grey spent four (4) decades in the field of education and she considers the students that she taught as her greatest accomplishment.  She feels great pride when she sees them asserting themselves as prominent members of society including her daughters, Chloerissa, the financial planner and Marijka, the doctor.  She also valued her interactions with the religious sisters over the years, because their encouragement and belief in her led her to become the woman she is today.  Her main goal was to pass on their beliefs and to carry on the ethos of St Theresa’s Convent School, “May Tomorrow Find Us Farther Than Today”.  When she retired in July she believed that she was doing just that, allowing tomorrow to find her farther along than she was 48 years ago when she first started teaching.