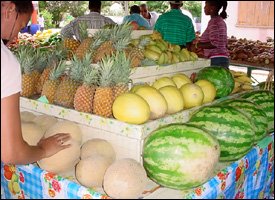 With more former sugar lands given to farmers and the cultivation of larger acreages, the Department of Agriculture is reporting a significant increase in major food crops despite adverse weather conditions in the later part of 2008, which saw production dropped in others.

The Department of Agriculture is reporting an increase in carrots, onions, white potatoes, pineapples, yam and sweet potatoes and decreases in cabbage, sweet pepper, tomatoes, peanut and watermelon.

“This increase in production could be attributed to improved agronomic practices thus resulting in increased yield and farmers cultivating larger acreages as a result of some of the former sugar lands been made available for crop production,” said Stanley.

Mr. Stanley said that the two outreach centres located at Tabernacle (TOC) and Fahie’s (FOC) continued to provide extension service to farmers in the rural communities and to demonstrate continuous vegetable production under irrigated and rain-fed conditions, respectively.

He also reported that two sweet pepper plots, one cucumber and one tomato plot were affected by heavy rain and high wind, which led to early termination of the plants.

“When compared to 2007, production fell primarily because the number of plots established were less in 2008 and late planting which targeted the National Agricultural Exhibition since during this period crop production is generally low,” said Stanley.

He said that the seedling shed at the Tabernacle Outreach Center was expanded due to the high demand for seedling in that area.

“The Centre carried on result demonstration to demonstrate the use of plastic mulch during the dry season and farmers were convinced of the effects and possibilities of using the plastic mulch to enhance their production,” said the Director of Agriculture.

Ten farmers on St. Kitts attended the demonstration exercise and have started to use the plastic mulch on their own plots.