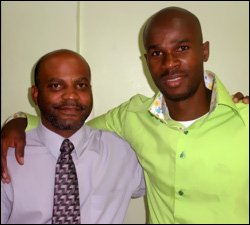 to honour our National Heroes, it is fitting that we should have the opportunity to pay homage to a living legend of our time. I speak of none other than Mr. Kim Collins, former World Champion, Commonwealth Champion and Olympic Finalist – one who has served this country with distinction throughout the world.

It was with a tinge of sadness that I listened to the press conference at which Kim announced his retirement from international athletics. As I listened to this humble professional, family man and Sport Ambassador get emotional about his work over the last seventeen (17) years, I could not help thinking that there spoke a role model for our youth and elders alike.

I will never forget how I felt when the announcer declared Kim Collins’ victory at the World Championships in Paris. I know that Kittitians, Nevisians and Caribbean people will also cherish this memory. Over the years, Kim’s accomplishments have proudly taken the flag of St. Kitts and Nevis to many countries around the world, which has further propelled our tourism marketing.
I wish Kim the very best in his future endeavours and look forward to his continued contribution to the development of the Federation of St. Kitts and Nevis. On behalf of my family and the People’s Action Movement, I say congratulations and well done to Kim Collins, our newest National Hero.