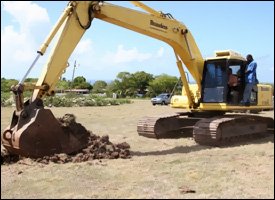 Minister of Health on Nevis Hon. Hensley Daniel said the construction of the Brown Hill Medical Centre was another aspect in the Nevis Island Administration’s (NIA) investment in health. The comment came Tuesday while he broke ground for construction of the facility.

Construction is expected to commence on September 7th by contractors Beyond Homes Ltd. through the Basic Needs Trust Fund 5th Programme. The project’s which is scheduled for six months, will be jointly funded by the NIA, the Caribbean Development Bank (CDB) and the Canadian International Development Agency (CIDA) at a cost of EC$500,000.

“It’s a critical component of preventative care. We would expect, given the outline of the services that would be provided at this facility, would ease the pressure from the central facility at Alexandra [Hospital].

“We are of the view that if we provide good facilities in the communities, then we would only have to deal with specific cases at the hospital,” Mr. Daniel said.

He also urged members of the surrounding communities to care for the facility, citing that government facilities were treated in a manner that suggested they did not belong to the people.

Mr. Daniel also registered his thanks to the other agencies who made the facility a reality and to the people of the community for their patience. He further said the Ministry of Health stood ready to work along with other communities on the island to deliver quality care to all.

Meantime, in an overview of the project, Mr. Emile Elmes of Consultants, Elmes and Associates who developed and designed the building, he said that several changes had been made to an original design which resulted in a 624 square foot increase in space.

According to Mr. Elmes, the final design was accepted in August 2008, by the Project Monitoring Committee which had been set up by the NIA to ensure adequate interaction between the building designers and the end users.

The building as he described it will be a single storey of reinforced concrete and concrete block with timber framed, metal sheeted roof and provide about 1,960 of floor space. The floors will be tiled and modern electrical and plumbing will be installed. It will also be accessible to wheel chair bound patients.

It will also be wired for local area network and internet access and provisions will be made for air conditioning in the nurse’s office, doctor’s office, examination room and the dressing room while other areas will be provided with adequate natural ventilation. Emergency water and electricity systems will also be installed.