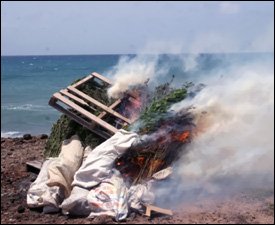 There is a little less banned drugs on the streets of Nevis, as Police on the island continue to reap success in the fight against illicit drugs.

Evidence of this came on Tuesday, when members of the Nevis Task Force, Nevis Police Division uprooted a number of mature marijuana trees and dispensed of them in an inferno in the outskirts of Charlestown.

Officer Corporal Delroy Javis Harris, a senior member of the Task Force charged with the operation, told the Department of Information that the illegal plants were found in the heights of Gingerland.

“On Saturday 15th August around 7AM men from Task Force and other officers of the Nevis Division were on patrol in the mountain of Gingerland where we uprooted 2,500 marijuana plants with an estimated street value of EC$9,000,” Cpl. Harris explained.

The drug bust came on the heels of another find two weeks ago, when officers uprooted and destroyed a number of less mature marijuana plants which ranged from 1-10 feet in hight, valued at EC$5,000.

Officer Harris used the opportunity to thank the public for their continued support which he said had contributed to the marijuana discoveries.

“We have had success in uprooting the marijuana trees. The first role of a police officer is to prevent and we prevent these dangerous drugs from hitting the streets of Nevis and St. Kitts.

The street value of the marijuana plants is calculated according to the maturity of the plant.