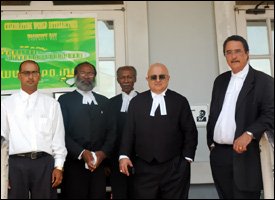 The Legal Team Hearing The Case
Photo By Erasmus Williams

Political Leader of the opposition People’s Action Movement (PAM), Mr. Lindsay Grant told High Court His Lordship Mr. Justice Errol Thomas Tuesday that although he consults occasionally with the Leader of the Opposition, Hon. Mark Brantley, he did not discuss with him, the possible membership of the Hon. Shawn Richards to serve as a member of the Constituency Boundaries Commission.

Under Cross-examination by prominent attorney Mr. Tony Astaphan, Mr. Grant also admitted although he was born in West Farm, he does not know the people of the West Farm, Boyd’s and Trinity areas and that he will have to campaign hard and spend more resources.

Mr. Grant admitted that he did not think it was necessary to make such a request to the Leader of the Opposition, Hon. Mark Brantley to name Mr. Richards as one of the two opposition members to serve on the Constituency Boundary Commission.

He told the Court that although he knows all the members of the CBC, he did not write to any of the members requesting a meeting to discuss what they were going to do in relation to the work of the CBC.

Mr. Grant admitted that the published policy paper on Electoral Reform formulated at PAM-sponsored Town Hall meetings was not discussed and ratified by the Party Executive and there was also no meeting of the Party to discuss the issue of boundary changes.

He said he could not recall if the Party had received invitations but did not officially attend meetings of the Committees established by the St. Kitts and Nevis National Assembly as outlined in the White Paper.

Under further cross examination by Senior Counsel Astaphan, Mr. Grant admitted that he had made several remarks in public that “boundary change or no boundary change” he and his party will win the next general election, but in re-examination by his lead Attorney, the Hon. Miss Mia Motley, said he will have a lot of work to do if the new area of West Farm, where he was born, becomes part of Constituency #4 in which he is a candidate.

Mr. Grant admitted that at times, he would decisions for the party alone, without consulting with the Party Executive or other members of the executive.

He said that the PAM’s position on Electoral Reform was not approved by the executive of the Party and there was no executive meeting to accept the document as the policy of the party, but the document represent his views as the political leader of PAM.

Mr. Grant claimed while he agitated on the streets on the issues of electricity and electoral reform, he did not hold a similar march against boundary changes as it was just in July this year that the issue became known to his party.

Mr. Grant also admitted that he told the Commonwealth Observer Mission, that he placed boundary changes on the priorities of PAM and accepted that he spoke and mentioned boundaries.

The Hon. Shawn Richards and Mr. Lindsay Grant have filed civil suits against the Attorney General, the Governor General, the Electoral Commission, the Constituency Boundaries Commission and the Supervisor of Elections to prevent the use of the Constituenct Boundary Report which has been approved by the National Assembly, assented to by the Governor General and published in the Official Gazzette.