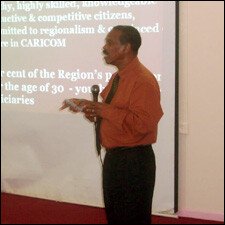 The Caribbean Community’s (CARICOM) Assistant Secretary General Human and Social Development, Dr. Edward Greene is impressed with the knowledge and passion of young people in St. Kitts and Nevis.

The comments were made at the conclusion of a National Council for Human and Social Development (COHSOD) consultation held at the conference room of the Ocean Terrace Inn, on Tuesday, November 17. The event was chaired by the Deputy Prime Minister and Minister of Youth, Honourable Sam Condor, and attended by representatives from youth organizations and high schools.

Dr. Greene noted that while most youth in the region appear to be unaware of CARICOM and related issues such as the CARICOM Single Market and Economy, young people in St. Kitts and Nevis were the exception. He explained that the attention to detail came out again during the recent discussion.

“What the main respondents did say is that we need to put a lot more empirical information in the report so that the decisions and recommendations would be driven by “¦ hard data,” he said. “`Secondly, I think what was very important was their advice that we have to identify the actions that we want the Heads of Government to take because “¦ only by doing so [can] we ensure that the richness of the report [is] feasible in the long run for those “¦ it is targeting, [i.e.] the youth, the policy makers as well as the non-governmental organizations and the private sector.”

The Assistant Secretary General for Human and Social Development stated that the young people expressed some concern about the lack of feedback after participating in similar forums.

He expressed confidence that the CARICOM Commission on Youth Development (CCYD) report will be given appropriate consideration and action by the Heads of Government, much like a similar report on non-communicable diseases – which resulted in the Declaration of Port of Spain – spurred activity in the “wellness revolution”.

“Over the last two years since that report, there are numerous activities throughout the Caribbean aimed at reducing non-communicable diseases,” the CARICOM official stressed, adding that supporting legislations have been put in place in several countries.”

“”¦ So indeed if that activity is anything to go by, I believe that if we get our young people to continue to advocate for youth development in accordance with the recommendations of this report, we could get Heads to be triggered into action in their respective countries,” Dr. Greene concluded.