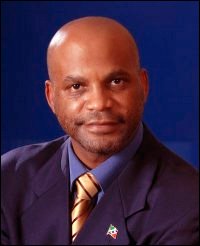 St. Kitts and Nevis Prime Minister Hon. Dr. Denzil L. Douglas has accused the political leader of the opposition People’s Action Movement of frustrating the voters by blocking their right to go to the ballot box and vote.

The opposition, which refused representation on the Parliamentary Constitutional & Electoral Reform and Boundaries Committee and the National Advisory Electoral Reform and Boundaries Committee charged with assisting in the electoral reform process, which began in August 2006, has gone to the High Court to challenged the Constituency Boundaries Commission (CBC) Report, which has been accepted by resolution in the National Assembly, assented to by the Governor General and published in the Official Gazette.

“The circumstances and timing of (PAM;s Court action) is  clear. PAM has brought these recent court challenges not because of any sacred principle. They are doing this not because this Government has done anything improper or anything illegal.  They are doing this because they wish to delay the calling of our elections. They are doing this because they wish to tire, to frustrate, and wear out the electorate.  The PAM is doing this because, as a matter of political survival, it is absolutely essential that they distract the electorate from their very poor performance when they were in office between 1980 and 1995 compared to the performance of my St. Kitts-Nevis Labour Party Administration in such crucial areas as housing, education, health care, agriculture and  tourism,” Prime Minister Douglas said at his monthly Press Conference.

Dr. Douglas, whose Labour Party has been attracting thousands at its twice weekly meetings, during Wednesday’s Press Conference pointed to the changing of the boundaries by the Peoples Action Movement Government in 1984 and in 1988.

“This is a matter of public record. The media, therefore, has not only an opportunity, but indeed, a responsibility to be straightforward in its reporting of the circumstances and timing under which the Peoples Action Movement Government changed its boundaries on these two occasions,” said Dr. Douglas.

“That having been said, however, I want to make it abundantly clear that my government has, for a long time, been ready to have the people vote.  Until the court cases are resolved, however, we shall continue pushing forward on pressing matters of state,” said Prime Minister Douglas.