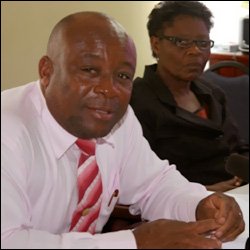 Another major step was taken on Monday in the Nevis Island Government’s delivery of health care, when contractual arrangements were concluded for the construction of the Brown Hill Medical Centre at a simple signing ceremony.

Minister of Health and Social Development on Nevis Hon. Hensley Daniel who witnessed the ceremony told the Department of Information that the EC$495,733.36 modern facility would serve villages from Beach Road, Brown Hill, Prospect and environs.

“It is patterned off after some which have been developed across the region”¦We have made provisions for a pharmacy, reception general bath rooms, waiting rooms, nurse stations, kitchen, doctor’s examination rooms, laundry and utility rooms.

“I think the older people would like to know, we have been insisting for buildings which would accommodate a wide range of people, we have to have ramps and this building will have one,” he said.

Mr. Daniel also explained that a number of programmes in particular outreach programmes would be offered at the new health facility that could not be accommodated in the past. They would include anti and post natal care and health promotion and disease prevention.

Construction work is expected to commence on the Caribbean Development Bank (CDB) and Canadian International Development Agency (CIDA) Funded project in September, one which Mr. Daniel said his Administration had worked assiduously to commence since it took office three years ago.

While the Minister urged the public to guard against vandalism on completion of the project, he said the NIA had made heavy investments in health services on Nevis and the Centre was yet another example.

Construction of the Brown Hill Medical Centre falls under the BNTF 5 programme.

Meantime, Mr. Daniel used the opportunity to thank the CDB and CIDA for their partnership in the venture and said the NIA looked forward to further engagements as they worked to promote economic and social development on the island.