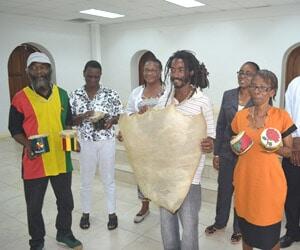 Participants of a Leather Tanning Workshop displayed their new-found skill in the art on April 14, 2016 at the St. Paul’s Anglican Church, during a small ceremony where they received their certificates of participation from Permanent Secretary in the Ministry of Finance Mr. Colin Dore.

The workshop was conducted by the Small Enterprise Development Unit (SEDU) in the Ministry of Finance in March.

In brief remarks, Dore said SEDU is always keen to give support to those who are willing to continue the skill. He said previously, most of the material needed to make drums were imported but the training workshop provided the opportunity for the trainees to produce the local raw material needed to keep the industry alive.

Meanwhile, workshop facilitator Christobel Jeffers expressed gratitude for the opportunity to impart her knowledge and skill to the participants. She commended them for their work and singled out Yvonne “Iona” Rogers whom she said went the extra mile.

In reaction to the new skills she received through the training, Rogers said she is pleased she was given the opportunity to learn the skill and has since produced baby rattles, key rings and small drums.

Another participant Earl Rawlins said although he had background knowledge prior to the training, what he was taught at the workshop was more refined. He hopes to incorporate his new skills in his production of big drums.

The other participants who received certification were Clyde Arthurton, Debra Griffin and Sherlita James.