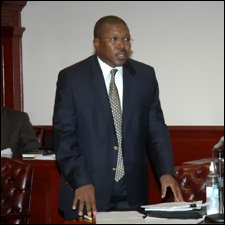 The Ministry of Justice and Legal Affairs has been involved in drafting laws that would facilitate the creation of a solid framework needed to improve trade opportunities and attract investment.

Attorney General and Minister of Justice and Legal Affairs, Dr. the Hon. Dennis Merchant said his ministry is also addressing the incidence of crime at the national level in terms of ensuring that appropriate laws are put in place to deal with the alarming incidence of crime.

“My Ministry continues to be involved in efforts of putting in place a solid legal framework aimed at combating crime and terrorism. I wish to restate what I said last year that crime, especially transnational crime, constitutes a major threat to democracy and the rule of law.  In that connection, we are continuing to make all efforts to deal with the contemporary problems in criminal law and to strengthen international co-operation in that area,” Dr. Merchant said at the Opening of the New Law Term on Tuesday.

He reflected on the functioning of the Attorney-General’s Chambers and the Ministry of Justice and Legal Affairs in relation to the judiciary, good governance and other related matters.

The Attorney General disclosed that final arrangements have been made for the printing of the Revised Edition of the Laws of Saint Christopher and Nevis.

Dr. Merchant said that arrangements have been made to find a sustainable way to maintain the regular publication of accurate and accessible revised laws of the Federation, and by mid-next year a position to finalize the way forward.