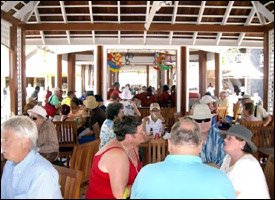 The St. Kitts – Nevis Defence Force has a critical role to play in preserving the twin-island Federation as a tourist destination.

Addressing the rank and file at the annual Christmas Luncheon, Prime Minister and Minister of National Security, Hon. Dr. Denzil L. Douglas said the role of the St. Kitts-Nevis Defence Force and the Royal St. Christopher and Nevis Police Force as protectors of the sovereignty and peace, is critical to the freedom and progress that nationals and residents enjoy as a people and a nation that is celebrating 25 years of independence.

Pointing out that in some of the world’s communities, peace remains elusive, many of them destabilised and wasted by warfare, Prime Minister Douglas said he was proud of the contribution that the St. Kitts-Nevis Defence Force continue to make to the political and social stability of the Federation.

“You must be mindful that as an economy in transition, these are all essential elements to creating the enabling environment for sustainable development, not only for the people of St. Kitts and Nevis, generally, but for your own children, your own parents, your own siblings, your own families, not only of this generation, but for generations yet unborn,” said Dr. Douglas.

He commended the soldiers for their proactive initiatives and strategic operations that form part of the fight against crime.

“We have heard of the threats to global security and the negative implications for the small vulnerable states of our region, such as this Federation. Given our heavy reliance on tourism as a major plank for income generation in our new economy, you must do your utmost to assist other law enforcement agencies such as the Royal St. Christopher and Nevis Police Force in preserving this country as tourist destination”¦one of peace and one of tranquility for which we are known worldwide,” said the St. Kitts and Nevis leader.