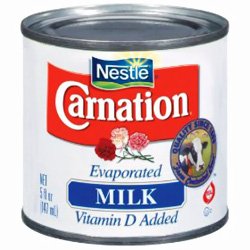 A press release from the Department of Consumer Affairs has revealed that Carnation Evaporated milk is expected to arrive in St. Kitts next week.

The Consumer Affairs press release is as follows:

“On 19th December, 2009 the Supply Office ordered eight (8) containers of large Carnation Evaporated Milk through its agent Rams Trading Limited.  The containers were scheduled to arrive during the first week of March 2009.

“Three (3) containers arrived in St. Kitts on 19th February, 2009.  On 6th March, 2009 a representative from Rams spoke to Mr. Vernal Fahie of the Government Supply Office and informed him that the Estimated Time of Arrival (ETA) of the remaining five (5) containers was 25th March, 2009.

“As of today those containers have not yet arrived.  Mr. Fahie contacted Rams and enquired into the whereabouts of the containers and was told by a representative from Rams that the containers were in Jamaica and the new ETA would be on Wednesday, 1st April, 2009.

“The Ministry would like to inform the General Public that although there is no Carnation at the Supply Office Storeroom, there is sufficient Cardinal Cream available to meet the demands of consumers for the next couple of days until the shipment arrives next week Wednesday.

“The Ministry regrets any inconvenience that may have been caused by the delay in the arrival of the milk.”