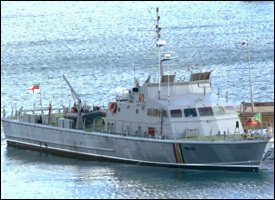 Yet another sign of incompetence from the Labour Government was revealed this week when it was discovered that the Coast Guard vessel, the Cutter Stalwart, is being held in Antigua by the company charged with completing repairs. The boat has been in Antigua since May of this year.

According to reports, the company has stripped the ship of its computers because of failure of the Labour Government to pay its repair bills. A number of members of the Coast Guard are living on the boat in Antigua without a meals allowance waiting in vain for action from the Labour Government.

PAM Parliamentarian Shawn Richards, who earlier this year exposed disgusting conditions at Camp Springfield, commented, “This is yet another sign of complete and utter incompetence from the Labour Government. We have a ship that is out-of-commission because the Labour Government can’t pay its bills. And, we have officers who are getting sick and having to foot the bill for food just so that they can sit around a ship that isn’t being used.”

The previous officers who were sent to Antigua with the boat have returned to St. Kitts as they complained bitterly about the poor treatment they received from our Government while there. On numerous occasions they had to call family and friends in St. Kitts to assist them with food, etc. a new batch of Officers were then sent off to Antigua and they are also complaining.

Furthermore, while our Country continues to be plagued by illegal firearms entering our ports, the Government has the major coast guard vessel, Cutter Stalwart, in Antigua sitting in the waters there.